A reminder of the last TWO pieces of advice that my Daddy gave before he died,... which Saved Me 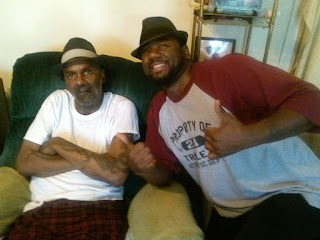 "Big B, From Big D"  was what they called him.... and trust me, he earned that name right down to the very last letter. Not a man of many words, but a demeanor which spoke loud enough for the world to hear when he walked in your direction ( minus the action movie theme music).   Big broad shoulders attached to a frame large enough to make the house seem smaller whenever he'd enter through the front door. It's no wonder why his presence had me feeling both warm on the inside and cold on the outside . Because he never liked to repeat himself, whenever Daddy did have something to say, he'd say it in a way that would demand your undivided attention. Without raising his voice, using the  combination of a deep, strong vocal tone and razor blade eyes ( a technique i'm sure he developed over the years) kept nothing short of the fear of God in me, when he gave instructions. Sometimes, while doing chores I used to daydream about how nice it was gonna be when I grow up and get as big as he is, so I can show HIM who's boss. "Yea, Just call me Bigger B " (says the little voice in my head).

Fast forward 30 years....
The Big huge frame that I always dreamed of having is now standing over  a man less than half his normal weight, lying in the hospital bed. The Warrior in Big B's  eyes are now filled with disappointment because he knows that the body can now no longer withstand the  physical complications caused by an onslaught of cancerous symptoms over the years. When I kept hearing him say over and over to himself " I'm Tired", I knew that his statement was in reference to more than just the physical part of the fight. No time for the Hollywood style cliche's like" If only I could turn back the hands of time, there's so many things i'd do differently".  But, with very little air left in his body, he managed to sum up a life long list of fatherly advice into two sentences. With love, he grabbed my hand, held it ( which caught off guard, since I was taught to believe that showing signs of affection made you "Soft") and said, "Son, Real Men step up to the plate.........Do the Right Thing".

"Uh....Okay Daddy", was all I could reply out of respect for all things considered at the moment, but deep down was a voice screaming "Man.What.The.Hell ?!  That's It ? After all of these years of us not having a relationship , THIS is the best that you could do ?"  My father was blessed escaped death atleast 6 different times that I know of ( which is how he earned the name " Superman" ), so obviously, it was hard for me to accept that this time would be any different, regardless of how everyone else in the room felt that day. But Big B knew, that once I walked out of the door of that hospital, our next visit would be with me looking down at him in a casket. Once he saw me enter the room, Maurice " Big B" Butler, mustered up all of the energy that he could to preserve the image of the big strong cool giant, I've always saw him as being, over the sick brittle shell he'd became. Sure, he could've used the last time to tell me what I've wanted to hear, but when you have very little air to breathe nor speak, what other options are there left for a dying man to choose? He made a choice to give me something that he knew I needed to know. ( 1. Step up to the plate, 2. Do the Right Thing )
Those mere words of simplicity, turned out to be seeds of wisdom, as I always found them useful during some of the most trying times in my life. My father knew that I needed his advice and had faith that one day I'd figure it out. As a heavy thinker at times, we tend to get caught-up into the spawned web of "What-Ifs", So much so, until you'll find yourself not even moving at all. For instance: Let's say we come up with plan A.  Then, there's a plan B in case A doesn't work. Before you know it you've made plans  C - Z,all without having taken the first step. Faith is the idea that starts the process for manifestation, but it's your courage to " Step up to the Plate", which will define how much , how fast, or how strong your subjective thought ( prayer) will come into the objective (reality). Don't get caught-up into the act of being so indecisive because of the fear of either what is ,or isn't going to happen.  The worst decision, is indecision. Having the courage to overcome our fears by knowing what obstacles that lay ahead and still " stepping up to the plate" to tackle them anyway, is what Life is all about. Change, change, change.

The next piece of advice I still find a bit challenging at times. To " Do the Right Thing", isn't exactly easy as it seems. Especially during those moments when the right thing for something or someone else comes at the expense of the " Wrong Thing" being done to you. Most times, one would often question the reward, rather than the act itself , but this is the love that Jesus and all of the great spiritual leaders explained that one must have in order to attain the true nature of God within. It's not about being too nice, passive, or even gullible ( for those who still have the black heart from being taken advantage of too many times like I did),  but about knowing that since God created everything out of Love, then everything created MUST have Love ( the act of showing care in any form for someone or something else WITHOUT expectancy of a return) in order to survive. Like the act of forgiveness which gives POWER to the one who forgives, rather than the one who receives, so it is  with Love, the most powerful form of energy we possess.

I guess you could say that my father left me with the seeds I needed to grow my own garden of Life. No need me for  to take over as "Bigger B"now . Maurio Butler,  will do just fine. And So It Is.